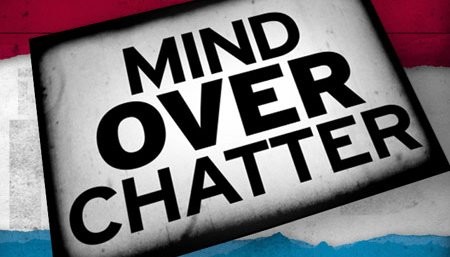 While apparently we may shut up, the challenge with most of us is the inaudible conversation that goes on involuntarily in the head. That incessant chatter between you (as the protagonist) and the other(s) as antagonist.

Yes, notice how most often it is battle of sorts where the protagonist is the best-of-the-best and a clear winner. Most of our involuntary thinking and speaking-in-the-mind is about imagining oneself in ones very best, correcting goof ups happened in past and re-framing them to be more acceptable, if not utterly convincing.

Those who consider themselves as expert in linguistic art, celebrities of sorts – writers, authors, speakers, orators – would be preoccupied speaking to their audience and flooring them with their imaginary panache. What’s interesting is that most of this imaginary stuff stays in the mind unexpressed. What gets expressed finally is not only very different but most often perhaps more appropriate than what that imaginary expression seemed to be, to the expressionist.

So how does one manage this funny, not-so-meaningful chatter and listen?

After having arrived at the fifth stage and being there for some time, some thing magical will happen. I won’t tell you what – I do not want to take away the surprise. For sure, it will happen. And if and when it does, if you can please be good enough to come back to this post and share the magic.

Happy watching until then!